Yesterday, thousands upon thousands of Zimbabweans took to the streets to express their desire for Mugabe to step down. Invited by the war veterans to show support for the defence forces and their actions, this was not a typical invitation, and for many Zimbabweans, these are not our typical allies. Which is perhaps part of what makes it so exquisitely beautiful. We gathered, black, white, mixed race, indian, young, old, rich and poor, street kids, students, activists, war veterans, women, men, civil rights workers and military.

It was to ask Mugabe to resign after 37 years in power, and yet it was so very much more than that.

What was most remarkable was the absence of hatred and anger. The overwhelming feeling on the streets was joy. My being fills with tears as I touch back into it. I don’t know that I have ever experienced such a collective well-spring of joy. Joy and love and unity that transcended decades of fear, division and hatred.

We were dancing in the streets. We were connected. It was not so much a connection against Mugabe, as it was a connection for our country, for our freedom. It was a day of spontaneous meetings in exuberance. I would catch someone’s eyes, and we would smile, sometimes laugh, and then clasp hands, or high five. Over and over again, these moments of meeting in joy and celebration and coming together. This joy transmuting decades of fear and grief. How extraordinary that such darkness could result in such an outpouring of light and delight ;-).

We tasted something yesterday that is now a part of our story. Something released. Something shifted. Whatever comes next, there has been a fundamental shift in the field in which we live and breathe.

And it was made possible by the military, They held space for Zimbabweans to step out after fear – and a sense of futility – had held so many of us back for so long. The outpouring of gratitude for the military was extraordinary. Whatever lies in their past, yesterday they had an experience of the gratitude and love that can flow when they hold space for the free expression of their people. Whatever happens next this will have given an experience of what it feels like to be loved, which will hopefully mean something when this moment of opening begins to close down, as it undoubtedly will.

Because life is a process of breathing, expanding and contracting. We are in an expansion. Contraction will at some point follow. As we move on from this day, I hope we go with questions of how we can work with what yesterday made possible: How can we nourish the social field that we are a part of, to support the fertility of this moment? How might we continue to connect across our diversity?

Yesterday we joined in the march and celebrations with our children. To me this is testament to the deep faith Paul, my husband, and I both have in the fabric of this country. There was a deeper knowing that we would be safe. Yes a little jitter and wondering whether we were insane, but at a more fundamental level a knowing that this impulse is one of peace, not of violence. Service stations and shops were open to sell water, drinks and snacks to people joining the march, rather than shutting down in fear of looting. Women came carrying their babies on their backs. No violence erupted. The only property destroyed were the street signs for Robert Mugabe Road, and some posters with his face on it. It makes me proud of what is moving here. It makes me believe we can find a way. Our ability yesterday to reach out and clasp the hand of the military yesterday (by their tanks!) makes me believe that we have learnt something so vital that we must remember whatever happens.

I met and engaged with more Zimbabweans yesterday than I possibly ever have. I went home enriched with faces and souls. Beautiful old women who beamed like solar constellations; young men drunk with exuberance; the old man who walked behind us, seeing our children and repeating several times ‘they are safe here. Your children are safe here.” And I know he meant in this march, but I also felt him say in this place and country. The old white man with the enormous Boerbull dog who was so proud to be from Zimbabwe. So proud to be here now. The war veteran who was walking with his son, and who wanted a picture of our children together: “our future.” The street kid who looked like his heart was alight. The soldier who in response to my thanking him said “It is done now, it is over.” And my sense was he was speaking of the past that has been holding us back.

We returned home, and while we were uploading our photos we found that our children and their friends were spontaneously erecting a flagpole to hoist the Zimbabwe flag, which we bought in town today. And this morning when we were outside sitting beneath it, my daughter quietly said, “I love the Zimbabwean flag.” 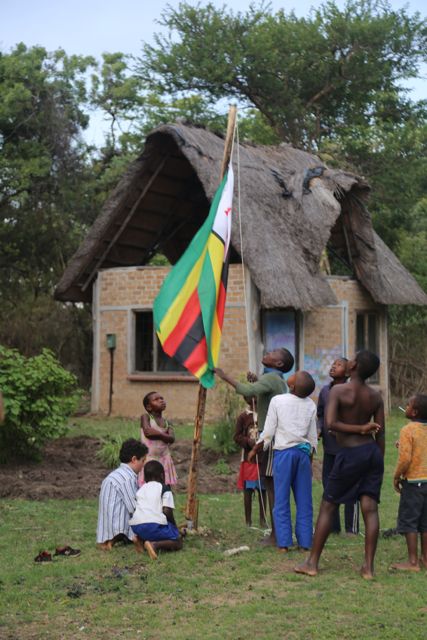 And what these days is teaching me about the love and joy that lie deep in our collective.

I will end with the words of a friend, Amanda:

“Yesterday, after decades of living with fear, oppression and division, Zimbabweans, in one day, countered all that with love, freedom and unity. True UNITY – not a veneer of politically correct, well marketed, lets make it look good for the cameras crap but a deep sense of real oneness. We purged all that heavy negativity that we’ve been carrying around for far too long and replaced it with liberating, laughing, smiling Joy.

The most important thing for me yesterday wasn’t about getting rid of an old man or flipping the middle finger to SADC or showing support to the people that led us onto the streets. It was about each and everyone of us remembering that we really, fucking truly are all ONE. What an empowering realisation that is. Whatever tomorrow holds we will face it together and we will triumph because what happened yesterday has made us strong again.”

“So here it is – I feel like a shell that I was in has cracked open and the fullness of the world is streaming in to meet me. It comes with so much light, I almost have to keep my eyes a little squinted. Light, love, joy, beauty. I walk past people and love them. Some of them can’t see me – perhaps they are still sitting in their shell. Shell’s are safe and snug, but not so good for meeting the world. Greeting the world. There is a bounce in my step and I want to dance into and through my dance. I guess I am. I see the sun’s rays touch a clearing in the woods through the clouds, that have opened for a moment and it takes my breath away. I am awash with gratitude. I hear a song that rocks and I laugh out loud. I hear the sound of the waves retreating from the beach, a sweet gentle swoosh and my skin crawls with delight.

I don’t think the world has changed radically in the last few weeks – so that is how I have come to my shell analogy. Something in me has cracked open so the sunlight can truly touch me.”

It is not like everything is always hunky dorey. As I sit here writing I am tired. I often wake tired during these days. But then I get up, and dance. As I dance my body wakes, and my soul returns from wherever it may have gone at night – and I see the grass and the trees and the rays of sun outside, and I marvel. And I cannot be anything by filled with delight for all this beauty sharing  my world with me.

Yesterday in my marvel I thought of all the people who don’t have the garden I do, (or the friends, or the community), and thought perhaps it was harder for them to wake in the morning and marvel at their surroundings.

Surely that is true – and yet…

So what exactly has changed?

I am not entirely sure, but here is my best shot at capturing some of it….

1. The dance is opening my body – Literally. Making me less dense. Where there was stiffness I am learning to find flow in the movement, where I was stuck I am coming open – perhaps even undone ;-). And I am learning that space is healing. Space creates lightness. We are mostly space, the density is in many ways an illusion. The dance is connecting me to the space between molecules. And where there is space there is freedom. I am becoming light and more free in the dance. I bring the density of mind into my dance and feel it dissipate beneath my dancing feet :).

2. I have made a choice a few years back to only do that which brings me joy. When I am filled with joy, my light shines brighter. So whilst it is in many ways a selfish choice, it is one which has benefited my family and friends so very much. I am literally becoming more luminous as I choose in accordance to my joy. What does joy dictate for me? Such things as: Dancing more, spending more time with the trees, playing with my dogs and my children, bringing more laughter and movement into the meetings I host, cleaning up my mess…. It aint a bad task master at all!

3. Gratitude. I am developing a habit of expressing consciously and oftentimes out loud with friends and family my gratitude. Gratitude is such a magical river. The more we express it, the more there is to express. So the more I touch my gratitude for the two enormous Msasa trees in our garden, the more I fall in love with them, and the more grateful I am, and perhaps it is that gratitude that spills over to the grass blowing gently in the wind, and the dance of the wind in the leaves of all the trees. It is full of magic and grace and power and beauty. And I stand in the morning at the end of the dance and am filled with gratitude for what is mine to touch and feel and live.

How can I not marvel at my life?

It makes me a little more vulnerable. Or perhaps a lot. This newfound openness. Stories of pain move me more quickly also. But I treasure that. I feel some relief in fact for being open to both, to all spectres. Sometimes it means retreating from others because it is too much to be open and connected. I am learning that balance, though, and thankfully I have friends that can call me back if I go into myself for too long.

And here we go. The journey continues. On with the dance.

“While I dance I can not judge, I can not hate, I can not separate myself from life.  I can only be joyful and whole. This is why I dance.”- Hans Bos 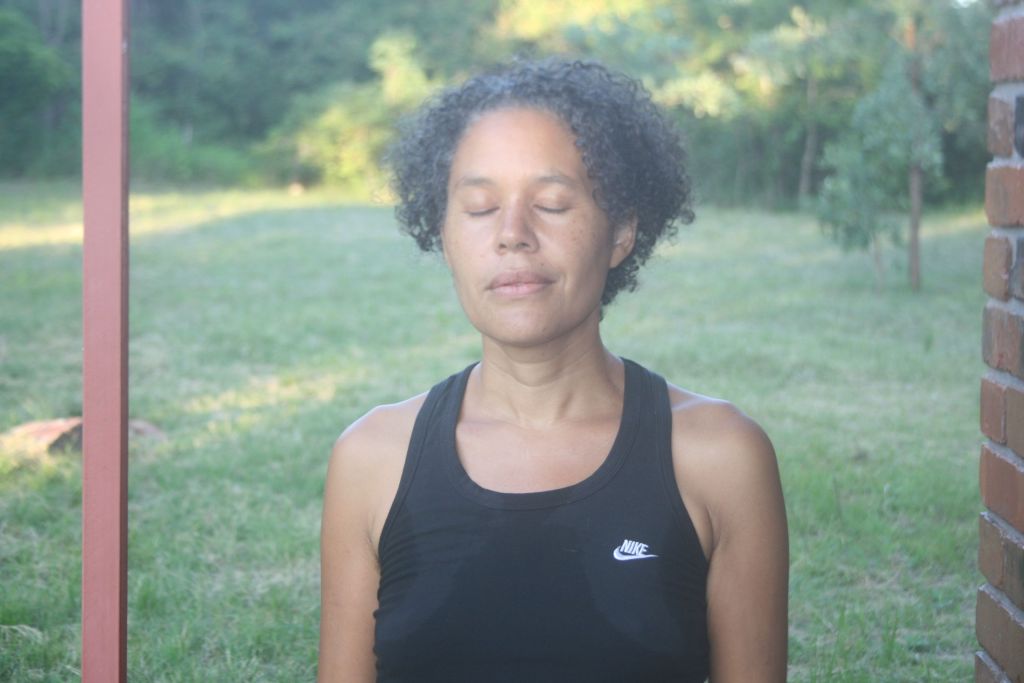